The Story of the Invictus : Growing Brand Of Motorcycle Luggage in India | IBM

Invictus Touring Gears First launched and start selling products in Pune's Narayan Peth, Invictus now selling products across the country. The company has now fastly grown and made own popularity in-country for design and quality of products.

Before we know about Invictus Touring Gears, Let's look at the History of motorcycle luggage 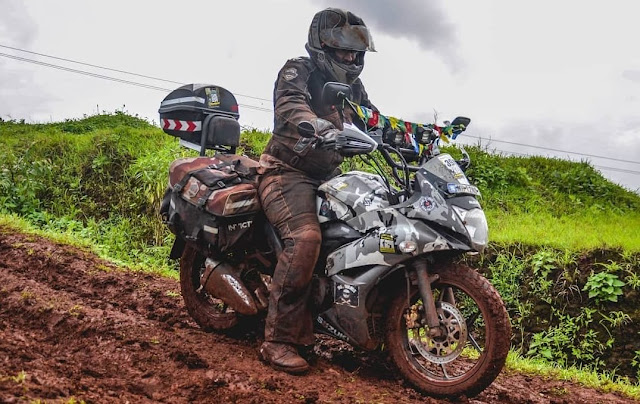 How did you get your idea for this motorcycle luggage business?

(Ans) Sourabh: It all started when I was specifically told I can't do it. The year 2014, my first Ladakh ride at the age of 20, I was riding on a 7-year-old Honda Shine 125cc bike with a group of friends, I was looking for motorcycle saddlebags and stuff when I realized there aren’t many options for nonriders bikes in the market at that time those available.

way too expensive for the purpose they were supposed to serve. So we made our first prototype bag at our stitching unit in Pune, at that time we had never made these type of bags, we manufacture mattresses so had the basic machinery, but not the specific raw material nor the expertise but managed to make a bag that lasted the ride and much beyond that ( still have it).

After I got back I realized there were many like me who don’t have what's typically known as “a rider's bike” but never let it stop them. Most of the market that time was concentrated on RE bikes and no one had any time for anyone else, people were forced to tie up whatever bags they could find in extremely unsafe ways and I had seen the consequences of that! "LUGGAGE FALLING OFF THE BIKES MID RIDE OR CATCHING FIRE ON THE EXHAUSTS" was not uncommon for us, stuff like saddle stays was unheard of and not easily available. This made me realize the huge potential this area has and I set to work.

What changes would you implement during your first year? and what difficulties you face?

(Ans) Sourabh: We didn’t start off as what you see us today, earlier we had the name Manas adventure gears. It was the name, my grandfather's brother used to manufacture trekking gears for friends, I carried forward using the same name for two years, we used to outsource work from Pune based independent craftsmen who worked on per piece basis, for the first year we used to sell from our shop in Narayan Peth, (2015-2016 ).

We managed to sell around 40 pieces of saddlebags in our first year, low sales were depressing, but I never let that stop me. We were making something so different that I knew it was going to be extremely hard for a new local brand to convince people that shape retention is more than just a marketing gimmick, our MRPs were slightly higher than the established brands, so a new brand with no name selling products at prices higher than established brands was unacceptable to people. Here we received unwavering support from my friends in Gixxer Club Pune and its admins Pramod and Raghu. They were the ones who encouraged me to approach stores.

In 2017 we started supplying the local stores in Pune, Destination Moto, and Saddle Store were the first stores we began supplying to. With access to stores, we came across various products of various brands, learning from the products studying them extensively, materials used, corners cut, stitching types, branding types.. each and everything was new to me and I learned everything I could from their products, from that time I study my competitor's products very seriously and as extensively as possible, mostly by cutting them open piece by piece! Approaching the store was not easy, most were extremely supportive and open to a Pune-based manufacturer entering the market, a few were dismissive. there were times where I was asked to leave stores in a less than polite manner and asked never to come again or be seen in any way as a Pune-based company can never be better than old brands or those who import in bulk. This experience incited me to work even harder and make products that would be unbeatable! Hence the name Invictus came to form (I am also a rugby and football player). Riding groups and our retail partners were my best source of inspiration for new products and ideas for improvements, Groups like Roadshakers were extremely helpful in providing a good insight into improvements and explaining the importance of well-made shape retention luggage.

2017 was an eventful year for us. We now supplied to over 5 stores in Pune and PCMC areas and had decent sales figures, almost all our dealers being experienced riders themselves we had huge help in getting feedbacks, suggestions for improvements. They used our products themselves first before letting us in their stores.. a practice we still have to this date and will continue forever. The main feedback we always received from everyone was about our logo back the,, In 2018 October I came up with the name Invictus Touring Gears and we officially got our new logo in October 2018 designed from my bikes tracing by Akash Dingare we entered Rider Mania 2018 as a brand for the first time. This was a huge confidence booster for me our saddlebags were met with enthusiasm by our fellow riders we managed to sell 50-60% of the stock we had got in 3 days. From that day I have never looked back. At the 3-day event, we stood next to almost all our competitors and yet managed to get a decent sale in spite of being an unknown brand. The event taught me a lot! Just because it's different doesn't mean it's wrong, Just because few understand it doesn't mean it's wrong, not giving up matters more, respect can get you where money never can.

2019 was where it all came together, we now had a decent and steady supply to Mumbai, Delhi, Banglore, etc and people now recognized us, especially by our trademark first aid kit compartments.. 2019 Rider Mania was when I decided that’s what I want to do for the rest of my days. We sold our entire stock of saddlebags and almost all our other products including the newly launched Himalayan Frame Bags in just 2 days! We completely ran out of stock in just 2 days!! We had bought 14 cartons and took back just 2.

Which people encouraged and supported you for your idea and for this business?

(Ans) Sourabh: Invictus was born out of insults, personal, professional, and otherwise but I have never let them define the brand or its ethics, My aim is was and always will be providing creative, innovative, practical long-lasting products to the biking community. There were many detractors but even more supporters I would not be where

Today we have 6 employees, 6 machines customers in each and every district of our country dealers in many cities we are expanding, redefining and we will continue to be a company known for being the most disruptive. 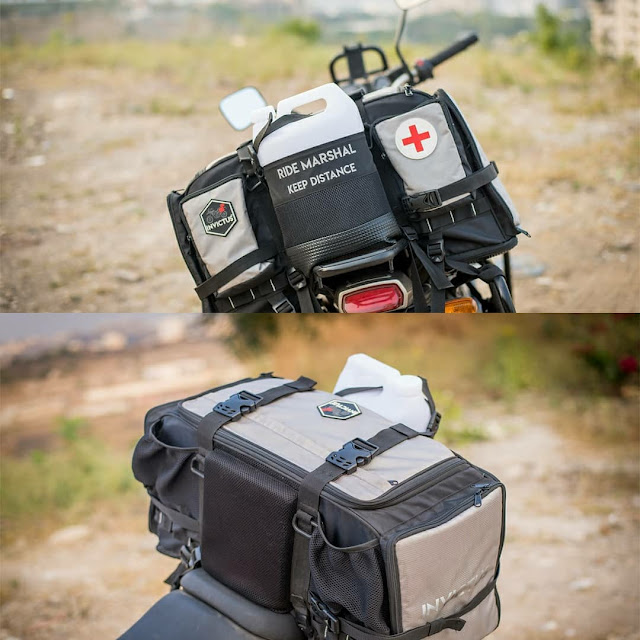 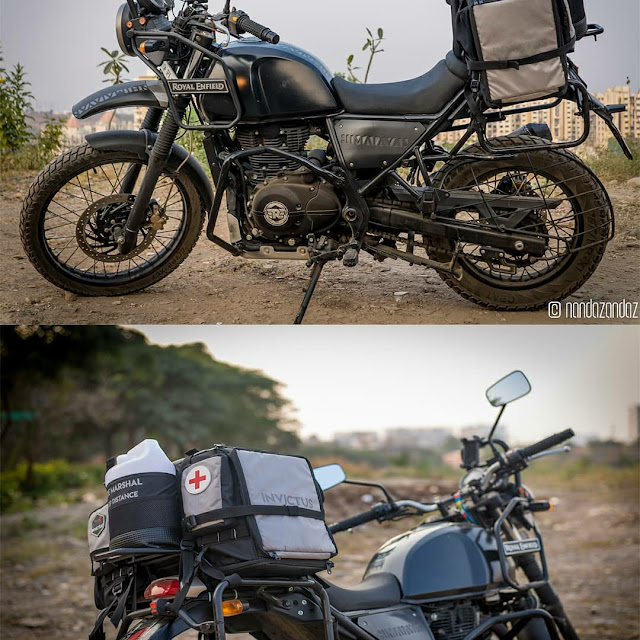 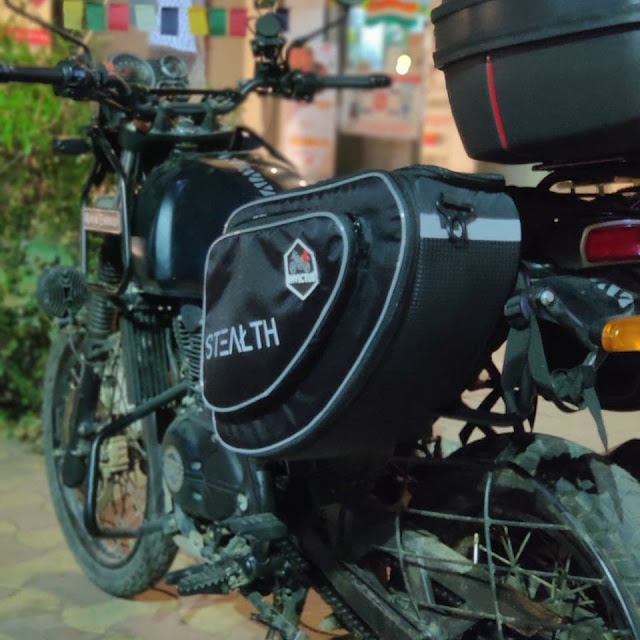 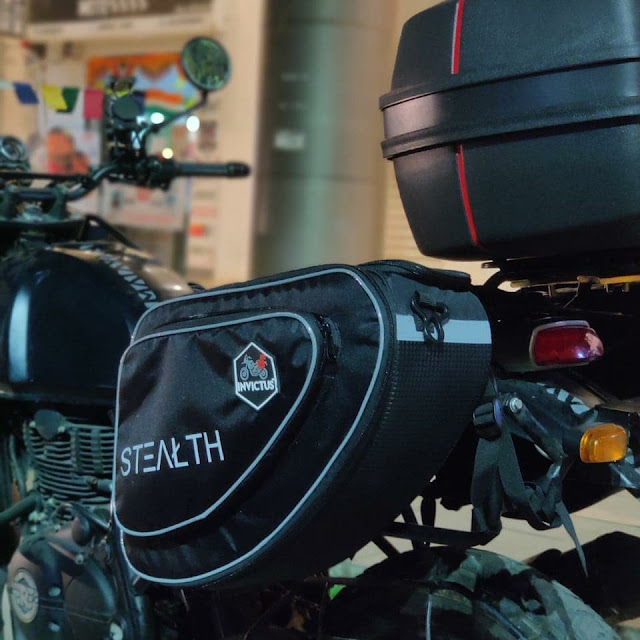