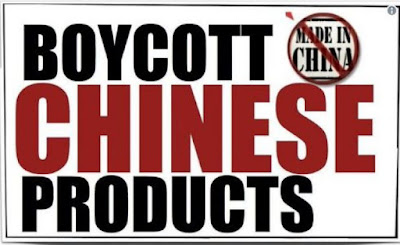 Why Boycott Chinese Product (in India)?

Because for the boycott include the perceived low quality of products, territorial conflicts involving China, support for separatist movements within China, and objection to more specific matters relating to China, such as the eating of dog meat in the world “In India to boycott Chinese goods due to border intrusion incidents”.

If there is any Indian who would still like to give Chinese intentions the benefit of the doubt, the killing of 20 Indian soldiers and officers in Ladakh should open their eyes. We cannot be in denial that China does not want peace except on its own terms – and its terms are about reducing India to a tributary or vassal, as is the case with pathetic Pakistan or Neanderthal North Korea.

Customer is the King. This means that consumers must stop using Chinese products. He gave a mantra to boycott made in China software in a week, hardware in a year, finished and non-essential products in a year and essential products, raw materials, etc. in the coming years in a systematic way.

India and China is the two fastest-growing economies in the world and India is one of the largest importers of Chinese goods and services in the world.

The trade deficit between India and China is the largest among the major trading partners. It is interesting to note that India imports nearly seven times more from China than it exports to it. India imports goods more than $50 billion from China and exports goods worth $2.5 billion to China.

It is a known fact that Chinese products are much cheaper than their Indian counterparts. Apart from this, The Chinese government also provides subsidies to its exporters. India spends nearly about 9% on transportation, energy, etc. but this cost is nullified by import duties imposed by India on China. To avoid import duties, many Chinese firms use trans-shipment routes-- shipping goods to Bhutan and then to India.  –(JAGARAN JOSH)

Impact on The Motorcycle Industry

China is known as the global manufacturing hub making anything and everything at a cheaper price, giving them an advantage over the rivals. With the tensions mounting on the Eastern Border of India, there's a huge campaign to Boycott China-made products. This, however, is not as easy as it may sound. Both Maruti Suzuki and Bajaj have raised concerns regarding the ongoing 'Boycott China' movement, stating that Indian consumers will be affected the most as their vendors import essential parts from China.

Having said that, there's one sector that has beaten China in its own game. As per an article published on CNBC-TV18, the Indian motorcycle industry with company's like Bajaj and TVS has not only beaten China in India, they are now dominating over Chinese made motorcycles in global markets too.