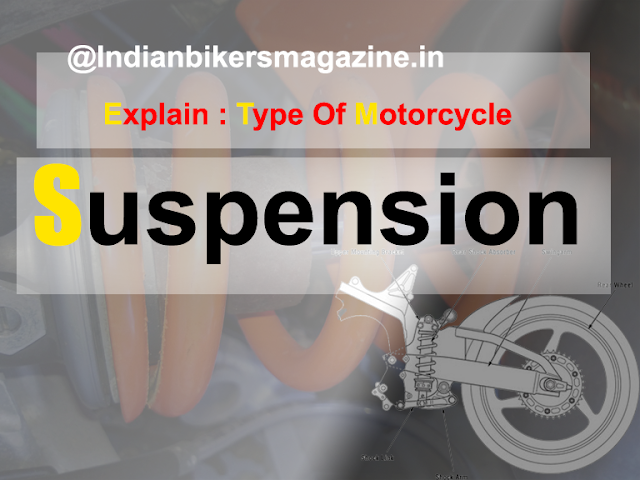 A motorcycle's suspension serves a dual purpose: contributing to the vehicle's handling and braking and providing safety and comfort by keeping the vehicle's passengers comfortably isolated from road noise, bumps, and vibrations.
The typical motorcycle has a pair of fork tubes for the front suspension, and a swingarm with one or two shock absorbers for the rear suspension

1. Telescopic Fork
Scott produced a motorcycle with telescopic forks in 1908 and would continue to use them until 1931. In 1935 BMW became the first manufacturer to produce a motorcycle with hydraulically damped telescopic forks. Most motorcycles today use telescopic forks for the front suspension. The forks can be most easily understood as simply large hydraulic shock absorbers with internal coil springs. They allow the front wheel to react to imperfections in the road while isolating the rest of the motorcycle from that motion.
2. Upside down telescopic forks
A more modern version of the conventional telescopic fork suspension is the upside-down forks, where the sliders, which typically are at the bottom, are positioned at the top. The sliders also contain the spring as well as the oil. The upside-down or USD fork offers advantages in terms of lesser un-sprung mass, and a stronger, wider slider clamping on to the yoke. While it offers more stability and is suited for performance-oriented machines if the oil seals inside the top part break, the oil would drain out and it won’t be usable, unlike the conventional forks where the system still remains functional for some time after leakages.
Modern telescopic fork suspensions come with a lot of adjustability in terms of pre-load, as well as damping. The telescopic fork setup on expensive motorcycles allows for spring pre-load, so as to stiffen up the suspension and make for a tauter ride for better control. In addition to pre-load, damping can also be controlled by regulating the oil flow within the forks. Suspension damping on more advanced systems facilitates stiffer damping when overcoming small bumps, and softer damping as the bumps get bigger, applying more force on the springs. The damping can be controlled for compression as well as rebound.
3. Sexon-Motodd Suspension
The Saxon-Motodd (marketed as Telelever by BMW) has an additional swingarm that mounts to the frame and supports the spring. This causes the rake and trail to increase during braking instead of decreasing as with traditional telescopic forks.
An improvement over the conventional forks, the Saxon-Motodd suspension comprised of a single wishbone that connects the frame with the twin telescopic sliders, at a point just above the wheel. There’s also a shock absorber located on the wishbone, which does the job of handling most of the suspension and braking forces. Among the system’s advantages are a lower un-sprung mass and decoupling the steering function of forks from shock absorption. This also reduces dive under braking and is said to enhance stability and comfort.
4. Hossack Suspension
The Hossack front suspension did a great job of separating the suspension from the steering. The system also significantly reduced the minor reduction in wheelbase that motorcycles suffer under heavy braking.  The system comprises of 2 wish-bones, along with an upright as well as linkages for the steering function.
The Hossack/Fior (marketed as Duolever by BMW) separates completely the suspension from steering forces. It was developed by Norman Hossack though used by Claude Fior and John Britten on racebikes. Hossack himself described the system as a 'steered upright'. In 2004 BMW announced the K1200S with a new front suspension that is based upon this design.
5. Trailing Link Front Suspension
A trailing link or trailing arm suspension setup comprises one or more arms, or links, connected between the axle and pivot point. The pivot point is ahead of the axle, and the link trails that point, hence the term trailing arm.
6. Leading Link Fron Suspension
Leading link or leading arm suspension is somewhat opposite of the trailing link suspension. In this type of setup, the wheel is suspended ahead of the pivot point through a link. Since the link leads the pivot point, in this case, it’s called a leading link suspension.
7. Springer Suspension
Girder front fork setup was used in some of the earliest motorcycles. Typically, a girder fork setup would comprise of a pair of upright legs, which are connected to the triple clamps. The pivot points on the legs are short links, which are connected with the triple clamps with a spring generally placed between the top and bottom triple clamps.
8. Hub-mounted Steering & Suspension
Hub-mounted steering systems for motorcycles are used very rarely, though they have been used on some production motorcycles. The system utilizes one or more swing arms connecting the main chassis with the front wheel, which allows for the vertical movement of the wheel. The steering points of the pivot for a hub-centered motorcycle are located in the hub unlike a conventional telescopic fork equipped motorcycle, which has it in the headstock.  The braking forces can be channeled horizontally through the swing-arm without having any impact on the suspension. The hub-centered steering and suspension system is claimed to offer great agility and consistency of steering, which is better than conventional forks. The efficacy of the system in the real world, however, is still a bit contentious. With its complex set of linkages and complicated setup, the hub-centered steering and suspension system is also quite expensive to produce. Another issue reported with such systems is a relative lack of feel and feedback to the rider while steering the motorcycle.