One of the famous motorcycle manufacturer company Royal Enfield is famous worldwide for offering heavy engine bikes. But do you know that Royal Enfield makes smaller cc bikes in past! In this first episode of " Vintage Bike Series", we present for you Royal Enfield Mofa. so let's know about this bike. 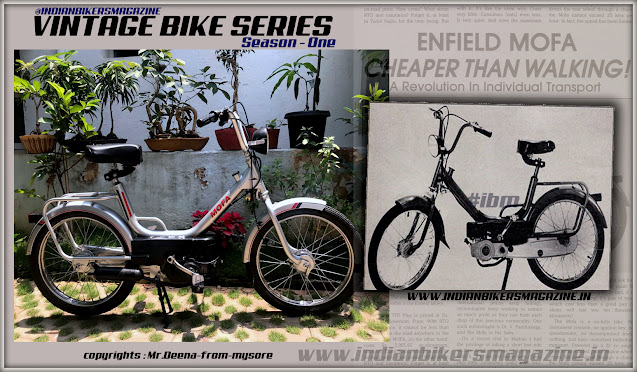 Mofa is a moped that is considered to be a low capacity motorcycle. It was designed by Morbidelli of Italy to manufacture the model in India. It was originally a motorized bicycle that comes with suspension and braking.
The Royal Enfield Mofa used a 22cc, two-stroke, single-cylinder, air-cooled engine that delivered a modest 0.8 bhp of maximum power. That isn’t a lot of horsepowers, but the vehicle weighed just 30 kg and could carry a payload of 80 kg.
Royal Enfield Mofa was a scooter cum bicycle. It was similar to the modern electric bi-cyles but with an IC engine. It had a very small engine that can only provide the force to overcome rolling friction and air resistance. So for initial pickup, you have to move the motorcycle with the help of paddles. It was the smallest bike or moped made by the Royal Enfield.