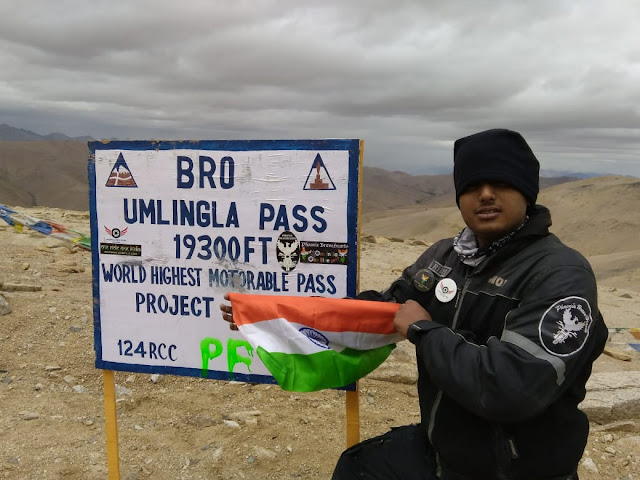 Ridham Dey is A keen and promising young rider. This is in regard to a bike ride that Ridham undertook along with dad. We have set two new records simultaneously.
Rider: Ridham Dey
From: Pune, Maharashtra
DOB: 04-10-1998

RIDHAM DEY have a THE YOUNGEST INDIAN RIDER
to cover
All the Major Motorable Extremities Of Mainland India In One Single Ride.
'OneIndia One Ride' was a motorcycle expedition to reach all the seven geographical extremes of mainland India in 'one single ride'. The expedition was undertaken by Ridham Dey and Abhijit Dey on their two Royal Enfield Thunderbirds and they are the first-ever riders to reach Turtuk, Ladakh (the northernmost Indian village), Kibithoo, Arunachal Pradesh (the easternmost Indian village), Karondi, Madhya Pradesh (the centremost Indian village), Guhar Moti, Bhuj (the westernmost Indian village), Kanyakumari, Tamil Nadu  (the southernmost most point of mainland  India), Umling La, Ladakh (the highest motorable road in India at 19323 feet above sea level) and Kuttanad, Kerela (the lowest region India at minus 7.2 feet below sea level) in one contiguous single ride. The expedition covered over 16,000kms in less than 42 days. Most importantly, the ride established Ridham Dey as the youngest rider to achieve the above-mentioned pan  India touring feat. Ridham Dey is 18 years of age turned 19 years old in the first week of Oct 2017.
The riders planted saplings in the five landmark regions and left the saplings in the custody of locals who were entrusted with the responsibility to ensure the survivability of the saplings.
The riders also experimented with cashless economy across the length of their ride and judged the depth of penetration made by the 'less cash economy' drive that was launched by the government about a year back. Lastly, but not least, the riders in their interactions with the local populace have spread the idea of One India that is a safe traveling destination.
The repairs and maintenance of the motorcycles were mostly done by the riders on a 'self-help' basis since there is no backup party for the expedition.
The expedition was flagged off from Karu, near Leh on 15  Aug 2017 to mark the momentous occasion of 70 years of our country's independence. The riders have reached Turtuk on 15  Aug,  Umling La on 19 Aug, Kibithoo on 06 Sep, Karondi on 13 Sep, Guhar Motion 16 Sep, Kanyakumari on 24 Sep and reached the final landmark at Kuttanad on 25 Sep. They are now on their way to Pune. The riders have faced snowfall, landslides, torrential rains, sweltering humidity, scorching sunlight, mechanical breakdowns, bad roads, and bad traffic so far as to reach all the geographical extremes of mainland India. The father and son duo are the first to undertake such a ride across the country. 'One India One Ride' is a journey to stitch India into a single fabric of nationalism.
ONE INDIA ONE RIDE: CITY BOY ENTERS INDIA BOOK OF RECORDS
India is a country replete with diverse cultures, religions, terrain, and climate. The singular binding spirit of this huge country - ‘unity in diversity is held in place by an equally huge human population of 1.2 billion. It is an extraordinary phenomenon to see natives of India merges effortlessly with each other despite the distinctive language, color, and customs of each ethnic group. To celebrate this uniqueness of India, a motorcycle expedition across the length and breadth of the country was undertaken by the father and son duo of Abhijit Dey and Ridham Dey.  Ridham Dey became the first 18-year-old biker to reach all the major seven geographical extremities of the country in one single ride.  The expedition also made this father-son duo the first riders to achieve this feat.
This ride did not have the cozy security of a backup team. The emphasis of the effort was on ‘self-reliance’ to overcome problems that were bound to occur while traversing through the diverse weather and terrain conditions that prevail during the monsoon months in India. A special highlight was given to the feeling of safety that one experiences in the country; from J&K to Tamil Nadu and Gujrat to Arunachal Pradesh, our country is safe. The expedition also experimented with making cashless transactions to judge the depth of penetration made by the national effort towards a less-cash economy.
The ride was flagged off from Karu, near Leh, symbolically on 15 Aug 2017 and terminated at Kuttanad, Kerela on 25th Sept 2017 after negotiating about 14000 km.
The following geographical landmarks were reached apart from other incidental landmarks in mainland India:-
Tags
ACHIEVEMENTS Records & Achievements Ridham Dey
Related Article